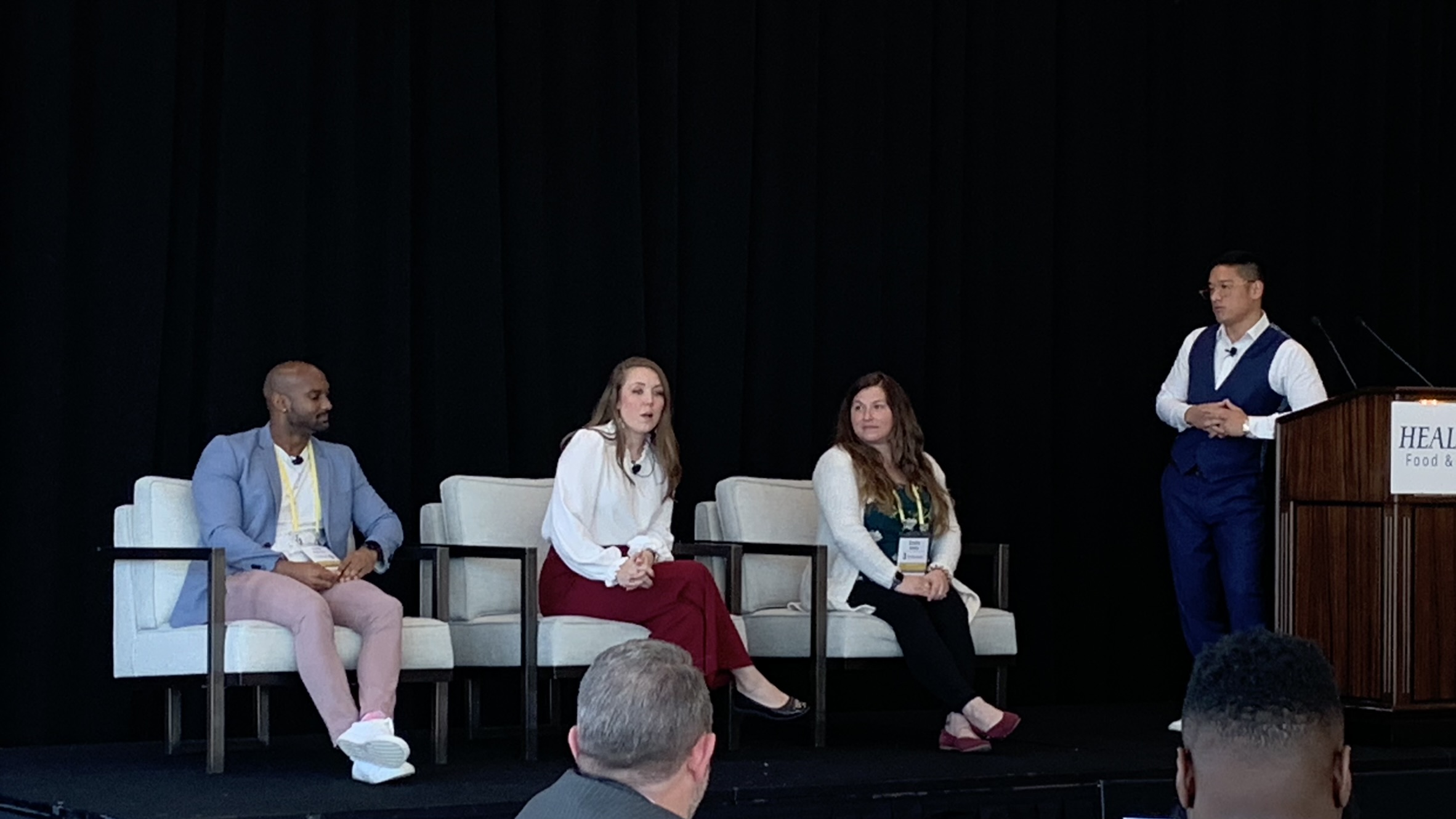 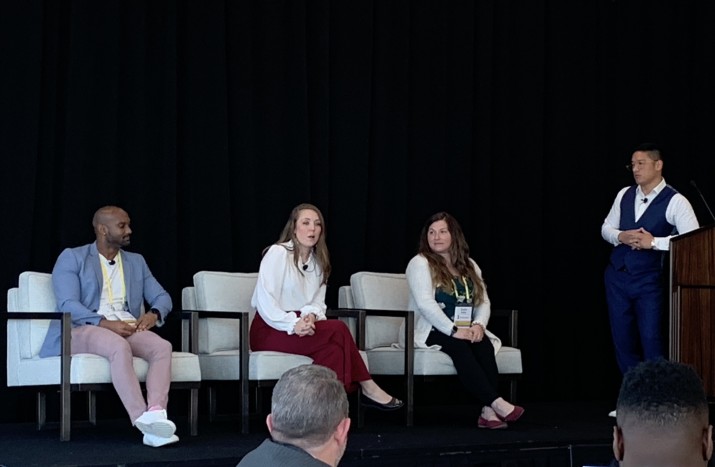 A Future of Dining Excellence
By Caroline Chan | January 25, 2023

HEALTHTAC Food and Beverage’s second panel discussed what the future of dining will look like for senior living’s culinary departments; it was aptly titled “A Future of Dining Excellence.” The panel was moderated by Edward Lo, VP of sales and marketing at FullCount, and the culinary panelists talked about how they are (or aren’t) implementing things like online ordering, reservations and sustainability measures in their communities. The event was held last month at the National Doral in Miami, FL.

“We are very close to rolling out online ordering through our point-of-sale [system],” began Emily Watts, director of dining operations at Immanuel. “Make sure you’re smart about how you roll it out and the timing, because you don’t want [a system] where everyone can order 30 things at once.”

So her community is still figuring out how to time orders appropriately. But the demand is there; families are requesting it for their loved ones and health care partners are asking for it for their residents. “It’s something that we’ve been asked about a lot,” said Watts.

Another panelist’s communities are also using online ordering—but not for their residents.

“We’re looking at it more for our employees,” said Elizabeth Calhoun, operations manager for culinary services at Bishop Gadsden Retirement Communities. “We get probably 200 employees that come through our cafe [for] each meal, so we’re looking at how we would time that out (and help our chefs), knowing how many are coming in.”

But online ordering doesn’t work for every community. Another panelist considered implementing it, but he conducted a poll among the residents, and the results were clear.

“I think maybe 5% said they would use it,” said Elvis Burrows, director of dining services for The Mayflower at Winter Park. “But [now] we have a younger clientele coming in…so I’m looking to redo that poll and see how it goes. I know online ordering is going to be the future.”

However, his company has been doing reservations to control the flow of patrons. Burrows suggested that they expand the system so residents can make reservations up to a week in advance, instead of just on the day of.

“Operationally, it makes so much sense,” Burrows said. “It helps with our food quality, because now we’ve switched from serving cafeteria-style to scratch cooking/made-to-order food.”

Calhoun added that reservations can help with food costs, too.

“In our fine dining restaurant…we take reservations up to 30 days [prior], and we’re typically booked out about two weeks in advance,” she said. “It’s great for us…with food costs—we know exactly what we need to be bringing in and what we need to prep.”

They also recently implemented an online reservation system, instead of having residents call to do so. “Probably 80% of them [residents] are using the online platform,” Calhoun said. “It’s taken us a little while to teach them how to use it and get it going, but it’s working amazing for us.”

Burrows switched up the menu system at his communities, and that helped them with their food costs. Before he was hired, the menu would change every week, and then the cycle would repeat after five weeks.

“I thought that was a headache,” he said. “We switched to a weekly menu where the menu doesn’t change for the whole week, and then each day, we add a different feature—maybe Friday’s International Day, there’s a Sandwich Day, etc. That dropped our food costs about 40%.” 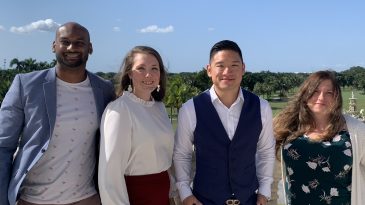 From left to right: Burrows, Calhoun, Lo and Watts

The panelists also talked about what they’re doing in their communities from a sustainability standpoint.

“We’re going to have the new generation—the baby boomers—come in and have this expectation. ‘What do you mean you don’t recycle? You don’t do composting?’ They’re doing it in their homes,” Watts reasoned. So her company is working to coordinate/increase both their recycling and composting efforts.

Calhoun implemented a reusable box program in her communities. “They [residents] come in, we let them take it out, they eat out of it and then they bring that box back to us. Then we put it through all the systems that it needs to go through and circulate it again,” she said. “It was a little difficult for them to get used to it in the beginning, but now they love it; they’re very proud of it.”

In fact, her residents are now trying to figure out how to implement the same system with cups.

Burrows modified his communities’ points-based system, and that’s helped their sustainability efforts (and decreased resident stress). Now, instead of residents having 15 points to get as much as they can, eat what they want and then take the rest to go (which they might not end up eating anyways), they can spend their 15 points across multiple meals.

“We’ve lowered the portion sizes, and now that they can choose what they want, they don’t eat as much. They eat what they need to eat, and then they can save [the rest of] their points,” Burrows explained. “We were spending $20,000 a month in paper to-go products, and it’s dropped to about $7,000-$9,000. That was a huge savings—and a huge amount of paper and plastic not being used on to-go food.”

As for the next challenge in senior living dining?

“Our incoming residents—our baby boomer crowd—have different expectations than the residents we currently have,” Calhoun said. For example, while her current residents expect people to dress up for the fine dining restaurant, her new residents want to be able to have that same upscale dining experience, even if they just came off the croquet court.

“Recently, we changed the way we fold napkins at the table, and that was a big to-do. They don’t like change,” Watts added. “But we have to start [doing things like] put sushi on the menu, because we also have baby boomers trickling in, and they want to see what they saw at their local favorite hot spot.”

So senior living culinary departments are having to strike that balance between what the current residents are used to, and what the new residents expect.

“[It’s about] being more innovative in our ambiance, aesthetic and food, while not upsetting our current residents,” Watts said. “I think senior living is going to struggle with that, because you have two very different generations.”