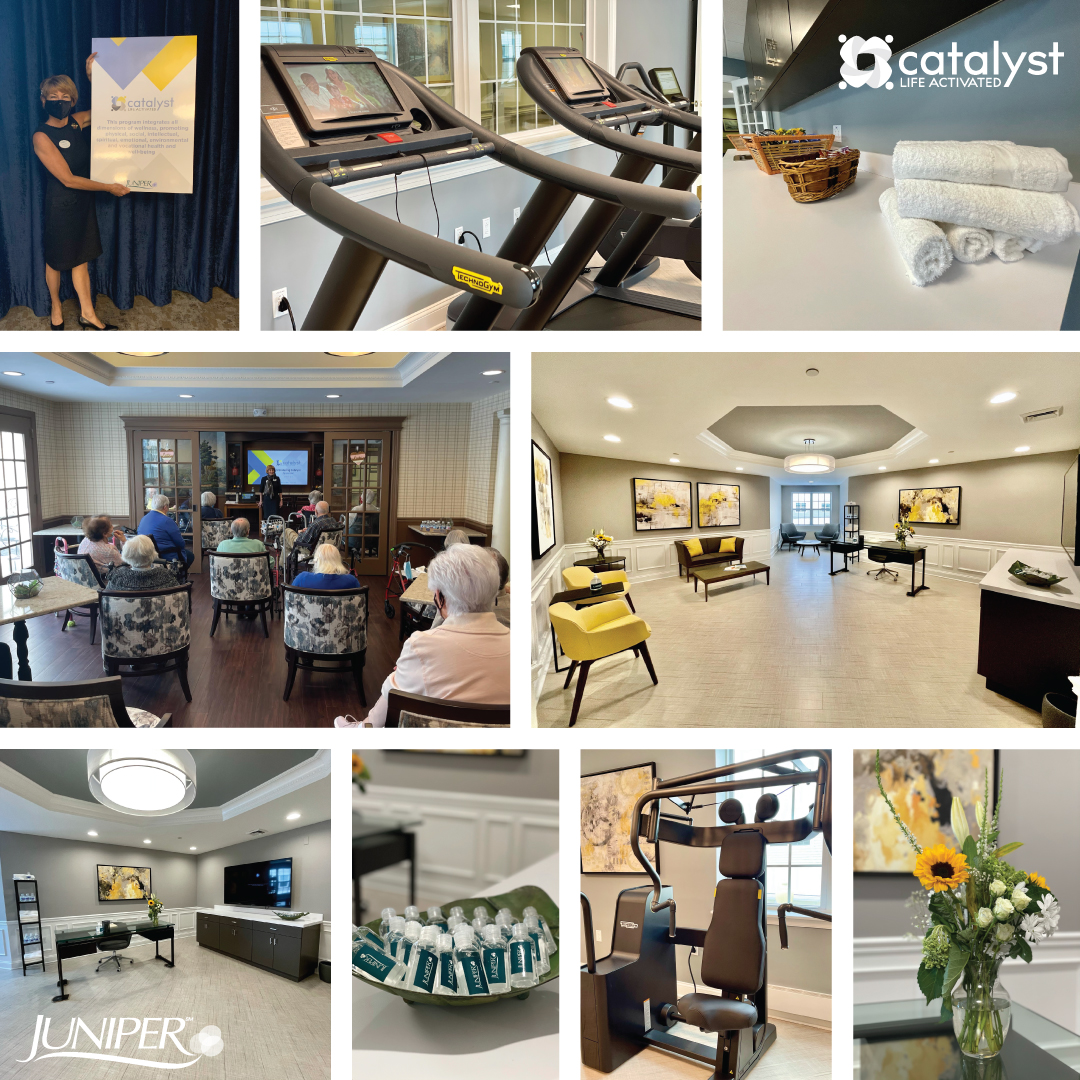 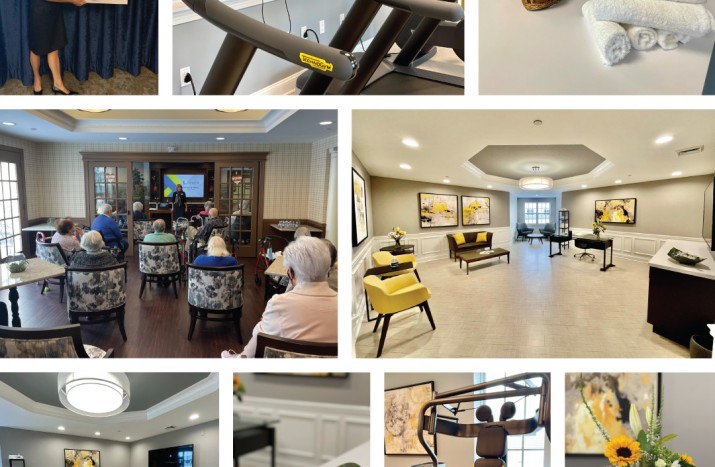 Most senior living communities have a lot of programs to help take care of their residents, but they can seem disconnected at times. Juniper Communities, which has 30 communities across Pennsylvania, New Jersey, Texas and Colorado, is working to connect a number of their services through their health and well-being program, Catalyst. 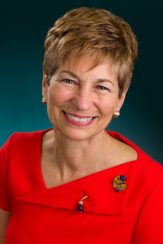 “Catalyst is an umbrella that brings together three (formerly) separate disciplines within a community,” said Lynne Katzmann, founder and CEO of Juniper Communities. Those three disciplines are care, hospitality services and engagement.

“All of those three disciplines are things that we in senior housing have traditionally provided,” Katzmann continued. “What Catalyst does is says, ‘All of these things are important for well-being, so let us effectively unite them in a way so that we can better manage someone’s lifestyle’…It evolves the notion of senior living from one which is essentially a group of siloed services, to one which is integrated.”

And that’s why it’s called Catalyst. “When you catalyze a reaction, you’re effectively bringing together several different things…[and] activating them and they create something new,” Katzmann explained.

“The program showed that on the care side…if we use technology and a human being to breach what happens in a community and what happens with outside providers that are non-hospital/non-acute providers, we could dramatically impact health and well-being,” Katzmann said. “The way we would measure that [is] by the number of times people went to hospitals, by their average length of stay and by the number of readmissions.”

She explained that this is important for chronic illnesses. According to Katzmann, Catalyst manages multiple aspects of lifestyle services that impact chronic condition management—and Connect 4 Life showed them that they could manage specifically the health care component of chronic illness. This means that Catalyst can “keep people healthy longer, and reduce costs for health care to the system,” Katzmann said.

And that’s part of the reason why Catalyst was created—to manage chronic illness in terms of population health. However, it was mainly created due to changing consumer demands and preferences.

“At Juniper, we started the movement away from medical intervention to prevention, and well-being as being something the next generation of senior living customers want,” Katzmann said. “We need to move to a system that manages and promotes health, rather than treats illness.”

She explained that people no longer want to be isolated and solely taken care of; instead, they want to get what they need, but also live better for a longer time, so they can do the things they’ve always wanted to do.

“The program is designed to promote what we call wellspan, which is not just additional years of life (longer lifespan), but also more quality of life during those years,” Katzmann said.

And that ties into what she feels is the best part of Catalyst.

“It’s innovating to make the consumer experience better,” she said. “My hope is that Catalyst delivers to the consumer, but it also provides an acknowledgement in the community at large of the value that senior housing brings to older adults—both in terms of what we can do to keep them healthy, but also to allow them to live their best life as they age. I think Catalyst is the next generation of senior living; I see it as a natural evolution from the work that we’ve done, to what we need to become as the industry and consumer evolves.”

For now, Catalyst is just for residents, but they will eventually be offering it to people outside of Juniper—and integrating them into their communities. “We have lots of public space in a [senior living] community, and most older adults…don’t mind being integrated into the community at large; in fact, they relish it. By opening memberships to older adults in the community, we change the tenor…and we use our spaces differently for the communities in which our buildings are located,” Katzmann explained. “It’s offering something out to the community in order to create a broader, more inclusive community, which supports well-being among all people.”

In fact, they’ve already started to involve the larger community into Juniper’s programs—especially when it comes to engagement.

Katzmann explained that engagement used to consist of very basic activities, such as bingo and Bible study. But about 15 years ago, they changed their approach. “We started looking at who people are, who they were earlier in their life and what they’ve wanted, and began to plan activities that [met] those needs or desires,” Katzmann said. “The old approach was doing for people; in this case, we are doing with people. The engagement model has shifted.”

However, those activities were still primarily done within the senior living community. Now, the new version of activities involves the broader community.

“We do engagement as integrating with the community at large, providing a whole host of different options for people to engage,” Katzmann said. 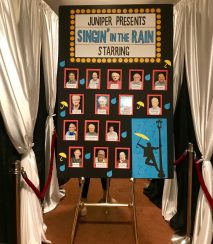 The cast for Singin’ in the Rain consisted of Juniper residents

She added that the involvement could be for any dimension of wellness, such as vocational, intellectual or artistic. For example, on the artistic side, Juniper’s been putting on Broadway musicals (such as Singin’ in the Rain) in their communities.

“We go out into the community; we find a director, musicians and volunteers who are willing to come in; and we cast a play,” Katzmann said. “We cast them from among our members and also some community people.”

She explained that in Mary Poppins, for example, they casted kids from the community to perform alongside their residents. 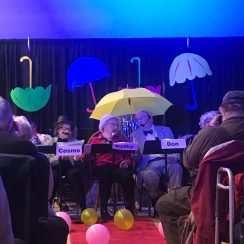 Residents performing Singin’ in the Rain

Then, after weeks of rehearsals, they put on a show. “A lot of the older adults can’t move as well as some of the Broadway dancers can, but the show is vibrant and allows people to find new ways to engage—not only by doing things they haven’t done before (singing, acting, doing set design, whatever it may be), but also [by] making new friends around the art [and] from the community at large,” Katzmann said.

Outside of the plays, they also have a poetry group, fitness opportunities, a community garden program and more.

“It’s all over the board; it depends on what people want,” Katzmann said. “It varies from building to building, but it’s about building connections within the community at large that create a community experience.”